You know what is creepy?
Creepy is when a song sang by a big celebrity
actually speaks the hell outta you.
She just nailed every single word that describes you now...
That actually speaks about you.

Sawadika!
After my stpm,well you should probably know I went to Bangkok and Chiang Mai for a holiday
with my family and we were all excited.
So driving up to Hatyai airport and board a plane to Bangkok...
Singing and laughing in the car was precious moments we could ever had.
Peeking at air-stewardess,voting and rating who's prettier and with a better attitude,
sneaking more peanuts given by the air-stewardess because it tasted so good that we kept asking for more!!
HAHA...all this idea came from dad...if you think it's mine...uh huh.

Then we reached Bangkok
Throughout the whole trip we realized in Thai:
1. Ladies loves to use eyeliner and draw their eyelines upwards.Like cleopethra.
2. Traffic jam everywhere! but still less accidents compared to Malaysia's
3. Ppl are more conservative in their clothings,total opposite with our other neighbour--Singapore
4. Ppl there are CRAZY about Korean stars...Super Junior,Kara,TVXQ,Girls Generation...you name it...their songs and mv are everywhere...especially "Sorry sorry"
5. Likes to ask "how much you want discount?" ,"what is your price?","if you buy many,i give more discount" when we go shopping even in SHOPPING MALLS.
6. Temples everywhere are normal sights...but even PALACE are everywhere! from season palace to 8th King palace to 9th king palace to queen's palace.
7. Ppl in Thai are very loyal to their king. Shame on us Malaysians....Sia sui
8. Everywhere we go,there we'll see His Highness pic.Till the point my sis and I will sing "here we go again" whenever we see his pic...and we sang from day 1 till day 6.Non-stop.

We visited Safari park in bangkok,watched like 5 great animal and stunt shows in one row!
Though everything was in Thai and we could'nt understand a thing,but the cute acts from the animals and stunt man were enough to capture our attention.
The most touching event would be the time we were waiting for the dolphin show.
This MC came up and start singing his heads off like it was his concert.Initially,I was thinking,
WTH? This isnt your personal concert dude...
then later he switched song to indian pop,asking the Indian audience to dance along. And immediately the whole indian crowd stood up and danced along! Everyone was so high till the next you know,even non-indians started dancing away on their feets! It was like an international party.
Music speaks no langguage or race.It connects and unites. That what's made me even more determine to continue my dreams.Hopefully,ppl will dance to my song someday...in a dolphin show. =P Haha 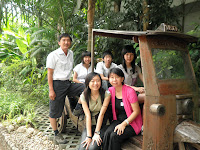 Then we flew to Chiang Mai.Mostly there we did alot...and I mean ALOT of flower watching.
Which was my fav! Going back to nature and this means alot of snip snap of pics!
We were escorted to this little and old setting hotel.Very classic and cosy.They served the best tomyam around. With the jazz band singing oldies on the background,wow....time just STOP.right there.
Funnily,the other hotel that we are staying in was also about the same theme.The oldies,classic kinda setting.It's actually an Inn,but a satisfactory one. 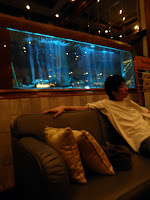 We then went to the night market which was very very long and big! Things sold there are more traditional and native.Handcrafts,scarfs,lights,deco,beads...all my taste!
Not the very IN kinda clothing. But just...so me.HAHA...
But there was an issue. Bargaining. Uh! how I hate that because i'm a bad bargainer.
So what if I get less discounts than you can get? I just wanna buy something I really like.I dont care about the price as long it's not too over the top.
Yet,the nagging and limitation from my bro and parents really pissed me off. I cant even shop in peace. And facing the very robotic and well-memorized "What is your price? " lines by the locals,i'm just fed up with shopping in frustration.
How I wish Sean or Mr.Foo was there to kill prices for me.All I do is just SAPU SEMUA!
Well,I still get to buy some good stuffs though....look at the brigh side that is. 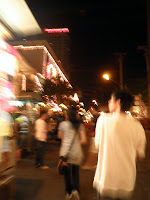 The next day we went to the one of the King's season palace.It's phenomenal!
Just to let you know,Chiang Mai's weather is like Cameron Highland's,so it's cool.
There were varieties of flowers and trees all around.It felt being in heaven's garden more than in a palace! Simply breathtaking.
The best part of the whole palace was the water resevoir. We climbed a long stairs with flowers along it and when we reached the top,there was this BIG water resevoir infront of us.
It's like a water fountain show. You just cant stop yourself to say "WOW" out loud. 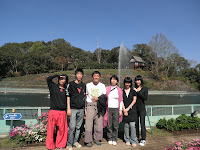 The "miao ren" village was also about flowers and plants. We saw most of them still live very traditional lifestyles. Disconnected from the outside world.But things had lil more changed since it became a tourism spot.
I spotted a kid learning Thai and he looked so innocent and energetic.Diff from those in the cities.
and also a native guy who looks 80% like Lee JunKi...Joie and I gave him a 6/10 because of his middle-line hair style...so out...haha!
If not...it'll be an 8/10!! =P
Well,the Double Dragon Temple was...ok.Maybe cz we didnt spend much time there.
Very amazed with the whole spiritual atmosphere. Ppl are so devoted. Makes me wonder,am I that faithful and devoted to God? Considering that I'd slack in my spiritual life.
Standing in the enemy's ground,you started thinking of going back to God...how ironic yet powerful.
We spent the rest of the afternoon visiting factories and of course,we never missed buying something out of there. =P

Joie and I went for mani and pedicure nearby the Inn.It was so pampering. Now i know why nail spa earn the hell outta ladies...You feel like a queen that instant
But the fun stops when dad and mom thought we were lost.They almost reported to the police and dad almost got knocked by a car. Opps...it was a big misunderstanding.
Yet,we all got back together when dinner was served.HAHA...guess a hungry man is an angry man...so when the belly is filled,the temper flows away together.

The highlight of the trip was the Elephant park.
Watching the whole elephant show was eye-opening and fullfillingly fun!
From the start,they bathe the elephants. Watching them dip themselves in the water,playing manja with the workers...haha...just so amusing to watch.
Then we watched how they dance,do the "sawadikap" post,blow the harmonica,kick football,shoot balloons...the best was the painting part.
How could they possibly train an elephant to paint trees,scenaries and flowers?? man...this is really freakingly COOL! and the paintings were sold as high as rm800. By elephants...hoho...
And we went to ride on an elephant,30minutes in the jungle. It was SWELL!!
so fun,rocky,shaky,creepy cz we may fall out anytime...it's just pure fun.
Watching them eating,poo-ing and urinate like the pipe bomba release water...was eye-opening.
huhuhuhu.... 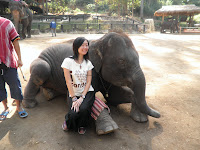 Last station was the world garden.
Another stop to watch flora...which was totally mind-blowing.
Look at how they design and decorate the whole place with flowers and trees...
Crazy...and breathtaking.
There's a Malaysia garden,but we were running out of time so we only stop at really awesome sights.
I just dont know how to describe it through words or pics...you gotta be there by yourself...
with a dxlr.HAHA.. 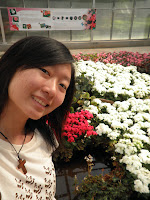 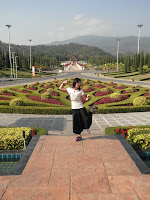 Then we flew back to Bangkok. Had the best and worst dinner ever.
Best cz it was finally the real Thai food we wanted to eat. I'm not gonna lie it tasted awesome when we ate it...
but it was hell cz the 4 of us siblings had food poisining once we got back the hotel. The whole night,we puked and fainted on our beds
I couldnt even move a muscle. Puked infront of the hotel doors with 2 old uncles staring at me like i'm somekinda lunatic...what's wrong with puking?? Bother...
All in all...we had a great experience.
Though I may not shop till I drop like I desired to,but I gotta observe and experience the life of the ppl in Thailand.
What really impressed me was their love for their king.The respect and loyalty.
We watched how thousands gathered at the palace on the night of the King's bday and brought a phenomenal celebration.
The whole place was jammed and pinked. (pink T was the theme as a symbol of good health)
Imagine,when our raja or sultan was sick in bed.Some even wished him to pass away so that we can have an extra holiday...Teruk.
Most importantly,I get to spend precious time with my family.
How often more we could spend a holiday as a whole family? Treasure the moment.
Despite the conflicts or arguments, we all enjoyed each other company.
Oh well,anyone wanna join me on a trip to Chiang Mai someday??

After the Big Showdown

Exams over.
How swell,how overwhelming.
I get butterflies in my stomach thinking
how I'm gonna spend this coming 7 months of holidaying...

But just before I could plan anything,
my december schedule are already exploding
with Christmas drama practise,bangkok family trip,yamaha music concert
and not to forget---Caroling!
Gosh,could my life get anymore exciting?

Oh yeah it will...
If I could really get 15K within 3 months
and get my arse to Perth
push my life to the edge of the earth...
Now thats what I call adventure.

Dont worry,
though things seems to unsure and blur
still my trust for God will continue to grow
and i'll hope for the best!
Posted by JoCeLyn SteMiLyn at 12/10/2009 11:59:00 PM No comments:

Hey,it's been a while since last few weeks
Oh whatever who reads...
i'm not some kinda blog star or celebrity...
All I do is just write some shit out of me... 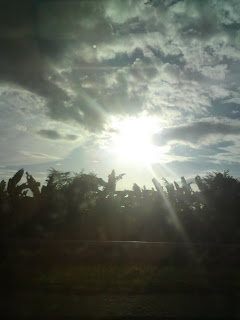 Stpm was rather shocky rocky

Alot of hard work and I still get dreamy

Dreaming about the papers soon to be...

All in all,it went on smoothly...

My long holidays are coming up

oh yeah baby I need to back rub 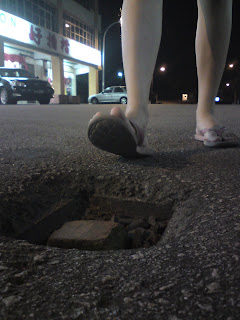 yet still the anxieties never stops to run

Will I ever get to Perth next January Tuesday?

Oh buoy,that's a hard "yes" I'll have to say 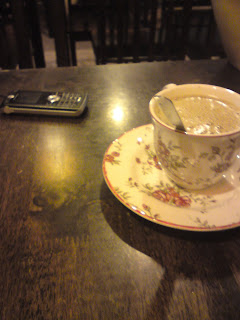 Was talking with an old friend today
about love relationships and marriage that are so gay
Oh,I'm still single by the way
19 years of life and I still haven't have the taste of kissing someone under the beautiful sunray
Oh well,guess I'm being desperate again aye??
You may think "Aww,that's what you desperados are thinking!""
You gals never get tired of soap operas and lame romance acting"
Well,you maybe right but i'm thinking
that I'm just being normal,my selfbeing
No need for anyone to start judging
I know I'll find the right kinda prince charming
just not now,it's really bad timing!
The bottom line is I know I'll find someone to hold
someday,somehow,somewhere I dont know
True love waits that I knowI know it's hopelessly silly and old fashion to the core
But I dont care Im gonna give my whole
To him I'll give my heart,my mindand my soul....
Posted by JoCeLyn SteMiLyn at 12/04/2009 11:19:00 AM No comments: